When I was a child and spent my summers in Bolton Landing, our place was like a Garden of Eden fruitbowl. There was a small orchard that had sour cherry trees (also called pie cherries) and various heritage apples planted in the 1930s (my father’s first wife, the artist Dorothy Dehner, made a beautiful group of drawings called “Life on the Farm” that labeled the fruit trees). Adjacent to the trees was a grape arbor of purple and white concord grapes.  Strawberries grew on our sloping hill in June, followed by blueberries in July, acres of them. There were thickets of blackberries (in August) on the edges of the woods and along the hiking paths we took, and when we would appear with big bowls at our friends the Bixbys down the road to during raspberry season.

David and Jean Smith with their daughters, Rebecca and Candida, Bolton Landing, ca. 1958.

We  had a big vegetable garden with all the usual summer fare, our favorites being corn and tomatoes. Chives grew along the driveway and pale yellow and black Tiger Swallowtail butterflies haunted the dill in the herb garden. My father was a great cook and I remember especially his Chinese-style dishes stir-fried in an electric skillet with ingredients he’d brought up from Chinatown in NYC, like elephant ear mushrooms and baby corn.  His other specialities were pea soup with a dollop of sour cream and pancakes in animal shapes.  These same shapes took form inbright red mercurochrome on scrapes on our legs; and in pale orange calamine lotion for our mosquito bites. Tall spokes of asparagus grew between the tea roses and the peonies in the flowerbed. My father was a great forager. When we took hikes in the woods he knew all the plants and could find things to eat everywhere. We often pulled the car over to the side of the road at a certain spot on Finkle brook where he had planted watercress and he would collect some for a salad. After it rained puffballs would bloom in the field (spherical mushrooms sometimes as big as a pancake) and he would harvest them and sauté them in butter. My father had a small rifle (a .22) with which he would hunt, venturing no further than his patio, to shoot pests threatening the garden. It was before my time, but I heard stories from my mother of his presenting Clement Greenberg and other city swells with meat pie made from woodchuck (David knew how to remove the glands that rendered woodchuck inedible) — revealing the provenance of the mystery meat after the fact. My sister Candida and I enjoyed eating frogs’ legs, even though they were probably the same ones we had been chasing around our ponds that day. We had winey, fragrant maple syrups bottled in old green Coke bottles from neighbors and homemade root beer at our neighbors the Neumanns.  For my sister’s August birthday we ritually breakfasted in our nightgowns on the patio on lobster and champagne (really ginger ale, but the small dash of real champagne and the bottle on the table convinced us). When we were babies our parents had the questionable practice of hanging bunches of grapes on nails near our beds so we would have a snack on arising – and keep quiet a little longer in the morning. What was perhaps most exotic for us was the row of glass jars of candy and the banana splits David made for us in fancy glass dishes.   We were very impressed because we knew his expertise came from working as a teenager at a soda fountain in Indiana where he learned such touches as dusting the sundae with malt powder, called “a dusty road”. 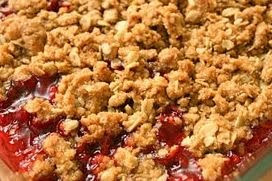 In the early summer, the apple people at our farmers market in Tribeca have four different varieties of cherry (sour , Bing, yellow Queen Anne, and one more that is inbetween); this cobbler would work with any of them.

Rinse and stem the cherries. Poke the pits out through the little stem hole with the round end of a bobby pin and  throw them in the compost. (We put all our compostable waste in bags in the freezer and take them to the farmers market on Saturdays. It seems like a big deal but it isn’t).

Mix and let stand for ½ hour

Add 2/3 cup sugar (less if you are not using tart cherries) and ¼ teaspoon almond essence. Put in a saucepan and heat, stirring gently, till the tapioca softens and becomes transparent. Scrape into a buttered 9” x 9” ceramic or glass baking pan (no metal and no plastic-coated; slight variations in size and shape are fine).

Cut butter into dry ingredients with two knives; or rub with your fingers until the butter is in pea-sized bits; or mix quickly in a food processor.

Stir briefly just to mix and turn the dough out on a hard, lightly floured surface.  Roll out to about 1/2″ thickness, remove about 25% of the dough (you can make a big biscuit from the extra but don’t bake it as long).  Spread the cherry mixture in the baking dish and arrange the dough layer on top.  Pierce all over with a sharp fork.  Brush the top with milk, melted butter or granulated sugar.  Bake 15 minutes.

Serve warm with runny yogurt (mango, blackberry or vanilla are good – Ronnybrook is a great brand).

“A Sanctuary for Weeds”: Social Ecologies at the Gallery at Industry City Work embodying a solution to the problem it references: The Legacy of Jackie Brookner

When Academic Isn’t a Dirty WordDavid Smith: A CentennialDavid Smith at Gagosian and Carl Andre at Paula Cooper
No suggested posts found

Other articles in "Recipes"

Back to School Special: Recipes for Artists and Students Poetry and Pho: Hoa Nguyen Shares Lyricism and a Recipe Mezcal23: Todd Mauritz’s Summer Cocktail Recipe The Sweetness of Arabia via Small Town Virginia and Arts and Letters

links from our supporters